Here’s what you get when modern medicine meets sheer willpower . . .

A guy in South Carolina named Adam Gorlitsky was paralyzed from the waist down in a car crash in 2005.  But he hasn’t let it hold him back.  And over the weekend, he set a pretty amazing WORLD RECORD.

He’s learned to walk again using a robotic exoskeleton that straps to his legs.  And on Saturday, he walked across the finish line after completing a FULL MARATHON.

He walked the Charleston Marathon in exactly 33 hours, 50 minutes, and 24 seconds.  Which beat the previous world record by about three hours.

It took him a year of training, and this wasn’t his first attempt.  He tried walking the Los Angeles Marathon last year, but had to stop about 17 miles in.

This time, he made it all 26.2 miles.  And he says he couldn’t have done it without his friends and family.

Charleston is his hometown.  So a ton of people came out to support him.  They’d walk a mile alongside him.  Then other friends would show up to walk the next mile.

He says he did it to send a message to people that your disabilities and adversities should never define who you are. 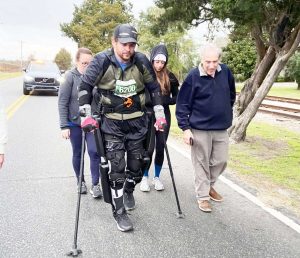 We’ve seen a thousand stories about people turning into money-grubbing jerks when they win the lottery.  Here’s how you SHOULD act . . . Two women in Canada named Susan Hook and Martha McCallum have […]

A convenience store in New York is blowing up on TikTok for a weird reason.  The owner’s son is 20-year-old Ahmed Alwan.  He’s been posting videos where he asks customers simple math questions.  And if […]

An elderly couple in Ohio were planning a big wedding this spring, but had to cancel it.  He’s 90 and she’s 85, and they didn’t want to wait.  So they got married on Zoom while 20 […]

This site uses Akismet to reduce spam. Learn how your comment data is processed.

Get the app, route and hotel listings here!