Three teenage boys in Canada were driving to a Tim Horton’s last week to get some snacks around one in the morning.  And they saw a woman’s car broken down in the middle of an intersection.

Their names are Bailey, Aeron, and Billy.  And they’re all between 15 and 18 years old.

Her car was smoking, so they knew it wasn’t drivable.  And she didn’t have money for a tow truck, but they wanted to help her out.

So they talked it through, then offered to PUSH her car all the way home . . . just over FOUR MILES.

Another random guy stopped to help, then followed behind them with his four-ways on to make sure no one crashed into them.

It ended up taking almost two hours to get her home.  Then they all went to bed around 4:00 AM.  And when they woke up, they’d gone viral.

The guy who followed them posted photos on Facebook praising them for it.  Aeron says he hopes it inspires more people to step in and help someone in need. 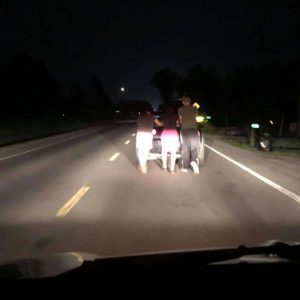 DERRICK NNADI is a defensive tackle for the Kansas City Chiefs.  And he’s celebrating their Super Bowl win this week in a pretty cool way. All season long, he’s been working with a group called the […]

A Couple Weds at a Hospital, so the Groom’s Grandmother Can Be There

June 21, 2019 britt The Good Stuff Comments Off on A Couple Weds at a Hospital, so the Groom’s Grandmother Can Be There

A couple in northern Texas named Sky Howard and Clay Cameron were planning to get married later this year, on New Year’s Eve.  And they were hoping Clay’s grandmother Charlotte could be there. But’s she’s […]

The whole ‘Storm Area 51’ thing has been in the news lately.  Around TWO MILLION people have now signed up to storm it in September and find evidence of an alien cover-up. It’s not clear […]

Tyler Farr with special guest Ross Ellis coming to the Surf Ballroom on Saturday, March 7th! Tickets go on sale Friday, January 17th at 8am at www.surfballroom.com or by phone at 641-357-6151. Tickets are $25 […]